Qatar is a small independent sovereign state in the Middle East and is one of the six members of the Gulf Cooperation Council (GCC), together with Saudi Arabia, Kuwait, the United Arab Emirates (UAE), Bahrain and Oman.

Qatar is mostly a low barren plain covered by sand on an 11,580 km2 peninsula extending 160 km northwards into the Persian Gulf, lying between latitudes 24° and 27°N, and longitudes 50° and 52°E.

Qatar borders Saudi Arabia to the south and is separated from the small island state of Bahrain in the west by an arm of the Persian Gulf, and has 563 km of uninterrupted coastline. The southwest of the country consists of rolling sand dunes, and the capital, Doha, lies on the east coast.

Qatar has a desert climate with year-round sunshine, hot humid summers and mild winters. Rain is infrequent, falling in brief showers mainly in the winter. Mean monthly temperatures range from 18°C in January to 36°C in July, and sometimes reaching over 40°C during the summer months. 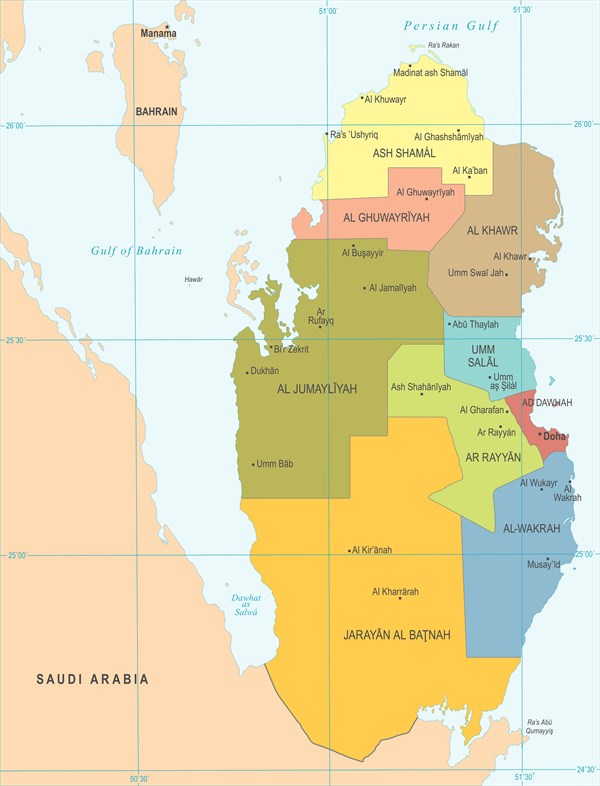 Qatar is a relatively small country, but one of the richest in the world with a very high gross domestic product (GDP) per head. This affluent market with its growing population offers opportunities for UK businesses across a wide range of sectors.

It has significant oil and gas reserves, and energy production per head dwarfs the other Gulf countries. As oil prices can and do fluctuate, the government is using the revenue generated to diversify its economy.

Qatar has transformed itself over the past two decades from a relatively unknown Gulf State to a prominent player on the world stage. Exploiting its significant oil and gas reserves, it has embarked on one of the largest and most ambitious infrastructure programmes in the world with projected spend of around £140 billion to deliver its 2030 Qatar National Vision (focused on economic, social, human and environmental development) and the 2022 FIFA World Cup.

Qatar’s economy is fundamentally strong but has been impacted by the fall in oil price and the ongoing blockade by Saudi Arabia, the UAE, Bahrain and Egypt.

The government is implementing reforms to tackle public spending and diversify the economy away from oil and gas, including through promoting the role of the private sector and SMEs.

Qatar is a market which requires patience to develop the necessary contacts to successfully win business. A long-term strategy is essential.

Contact a Department for International Trade (DIT) export adviser at: https://www.contactus.trade.gov.uk/enquiry/topic for a free consultation if you are interested in exporting to Qatar.

The UK remains very concerned by the ongoing tensions in the Gulf. The Prime Minister, Foreign Secretary and other Ministers are engaging with the UK’s Gulf counterparts to encourage de-escalation and to get firmly behind Kuwait’s mediation efforts.

The UK Government is continuing to monitor the current situation closely and is actively engaging with UK businesses in the UK and the region.

The closure of borders between Saudi Arabia/UAE/Bahrain/Egypt and Qatar has so far impacted on the movement of people and goods for UK businesses operating in the region. Many UK companies have found work-arounds to ensure impact is kept to a minimum, but the UK Government is aware there are longer-term concerns.

In discussions with regional counterparts, UK Ministers are making clear that finding a resolution to the current situation is important to protect UK interests in the region, including those of British businesses, and they support the Kuwaiti Government mediation efforts.

Where appropriate, affected companies are advised to check for updates to the Foreign Office travel advice (https://www.gov.uk/foreign-travel-advice/qatar), speak to DIT representatives in the UK and the region, as well as continue to monitor the wider media for updates on the situation.

Those affected may wish to contact their logistics service providers to understand what options may become available.

Under the leadership of His Highness Sheikh Tamim bin Hamad Al Thani, The Emir of the State of Qatar, the country plays an active role on the international stage. Qatar is a member of several international organisations, including the League of Arab States, the Gulf Cooperation Council (GCC), the Organisation of the Islamic Cooperation (OIC), the United Nations (where it was a member of the Security Council from 2005 to 2007), the Organization of the Petroleum Exporting Countries (OPEC), and the Gas Exporting Countries Forum (GECF).

90% of the 2.7 million population of Qatar is non-Qatari. Foreign workers are entirely dependent on their employer for residency rights. While the sponsorship (kafala) system was officially abolished in December 2016 and replaced with a contract-based system, employers still have a significant amount of power over their employees, including when some of them can leave the country and whether they can change employer.

In February 2015, the Emir of Qatar approved an amendment to the national labour law involving the payment of workers. Under the new Wage Protection System, companies are required to pay their employees through direct bank transfers, making it easier to scrutinise and document any late or non-existing payments. This law came into force on 2nd November 2015 and 85% of workers are now paid this way. In February 2017, the government announced any company not taking steps to pay this way would be black-listed.

In October 2015, Law 21 was passed on the entry, exit, and residency of Foreign Nationals. The new law, which came into effect in December 2016, introduced a new contract-based system rather than a sponsorship system. Employers are still responsible for issuing exit permits for an employee to leave the country, but if an employer objects to the request for leave, the employee now has the right to appeal to a new government grievance committee. However further work is underway to further relax the rules around exit permits, with only some workers who have financial responsibility subject to these in future.

The former law governing No Objection Certificates (NOC), allowing employees to change employer within Qatar, meant that foreign workers could not return to work in Qatar for two years after their contract ended unless they had their employer’s approval. Employees are now able to change jobs at the end of their fixed-term contract (usually at least two years). Foreign workers with open-ended contracts are able to change jobs after five years. Workers may be able to change jobs before the end of the contract if permission is granted by the employer and the Ministry of Interior (MOI). New implementation laws were announced in 2017, including that employees can change employer if their salary is regularly delayed.

Qatar is also tackling the payment of recruitment fees by employees to agencies in their country of origin. This binds employees into jobs for a certain amount of time, leaving them vulnerable to exploitation, delays of salary or bad conditions, and unable to change employers as they still owe money.

Accommodation for migrant workers, particularly construction workers, has come under significant scrutiny. The Qatari Government is constructing labour villages for its workers to prevent abuses in this area, and has increased the number of labour inspectors to 390. They are empowered to make ad-hoc visits to work sites and accommodation to check facilities and to ensure safety procedures are being followed.

In November 2017, Qatar signed an agreement on technical co-operation with the International Labour Organization aimed at targeting key areas to improve the situation for migrant workers in the country.

Domestic workers do not fall under the Labour Law and are therefore not protected. Domestic worker legislation was agreed by the Emir in October 2017 and is currently being passed into law. This should limit the number of hours worked per day and provide mandatory days off and holidays. This legislation is yet to come into effect.

As Qatar is considered a destination and transit area for human trafficking, the government opened the first shelter for victims of human trafficking in 2005. Qatar Foundation for Combating Human Trafficking was established in 2010.

In 2011 an anti-trafficking law was passed but so far no one has been prosecuted under it.

Qatar’s economy has been built on exploiting its significant oil and gas reserves. It remains strong but has been impacted by the falling oil price and the ongoing blockade by some of its regional neighbours. The Government is implementing reforms to tackle public spending and diversify the economy away from oil and gas, including through promoting the role of the private sector and SMEs. The blockade has accelerated these plans, and a range of reforms to improve ease of business are being explored.

The IMF released figures in October 2017 that indicated growth of 2.5% in 2017, and forecast 3.1% in 2018 and 3.2% in 2019. This is lower than earlier estimates due primarily to the impact of the crisis, but is still among the strongest growth in the region. The main risks to Qatar’s economic outlook in the short-term are related to international oil price movements and delays or cost overruns to infrastructure projects.

A main focus is on delivering infrastructure projects for the 2022 FIFA World Cup and 2030 National Vision, as well as increasing the efficiency of public spending.

The UK and Qatar are key trading partners. The bilateral economic relationship is strong and growing. Bilateral trade flows have increased significantly in recent years and Qatar is a significant investor in the UK with government investments worth over £35 billion.

In March 2017 the first Qatar-UK Business and Investment Forum was held in London and Birmingham. Led by both the UK and Qatari Prime Ministers, Qatar announced they would invest a further £5 billion in the UK over the next three-to-five years.

Many UK businesses operate in Qatar. Shell’s investment at the Pearl gas to liquids (GTL) plant at Ras Laffan is the single largest foreign investment in the country. Ties between the UK and Qatar oil and gas industries are close, with the liquefied natural gas terminal at Milford Haven in the UK, the largest in Europe, majority owned by Qatar Petroleum.

There are a number of reasons to choose Qatar as an export destination such as:

Contact a DIT export adviser at: https://www.contactus.trade.gov.uk/enquiry/topic for a free consultation if you are interested in exporting to Qatar.